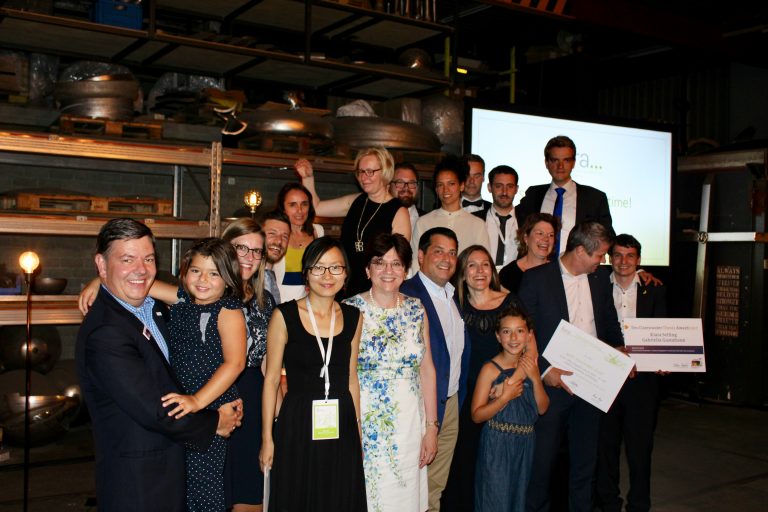 Hosted by the Windesheim University of Applied Sciences in the beautiful city of Zwolle, the IFERA 2018 Conference has been able to gather once again the family business community to discuss the effects of radical technological changes in the family business environment, as well as major social, economic and political changes in modern society. Enriched by some enlightening keynote speeches given by Jospeph H. Astrachan, Timothy S. Mescon, Kimberly D. Elsbach and Josip Kotlar, and characterized by an intense program of parallel sessions, the conference has also left some space for networking activities and some usual IFERA fun.

Among the social events, the Gala Dinner on July 5th has emerged as an outstanding night. The venue “Raw Space”, a converted industrial space now cultural platform of the famous artist Ronhald A. Westerhuis,, has been the perfect setting to enjoy delicious food and friendly chatting. During the Award Ceremony, thanks to the contribution of our eminent juries, six awards have been assigned as follows:

The “IFERA” Best paper on conference theme award went to Joseph Astrachan, Claudia Binz Astrachan and Josip Kotlar and their paper: “Family Firm Disrupters: Exploring the Relationships between Family Cohesion, Family Disruptive Capacity, and Company Disruptive Capacity”. The study sheds a light on family firm heterogeneity and its role on a firm’s capacity to act as a disruptive force by exploring the owning family’s influence on the firm’s ability to remain competitive in a fast-paced, ever-changing environment. The authors investigate the influence of Family Cohesion and Transgenerational Intent on what they term Family Disruptive Capacity, or family related characteristics that indicate a high openness to risk-taking and change within the owning family, and on Company Disruptive Capacity, or the company’s orientation and activity-based ability to anticipate and adapt to a rapidly changing environment. Findings, unexcitingly, show that family cohesion has a strong and positive effect on both family and company disruptive capacity, with transgenerational intent further strengthening the relationship.

The third award, The “Ten Clarenwater Foundation” best teaching case award, has been assigned to Jan Willem van der Vloot van Vliet, Rachel Heeringa and Ilse Matser for their teaching case “Jansen Office Supplies: Love to Work….or not? A Shift in Leadership and Strategy”, a case of cultural change and a shift of values connected with a succession in leadership that leaded the company Jansen Office Supplier close to the bankruptcy and encouraged the sons of the Jacob Jansen the Fifth to step up to the management team and create a stable strategy for the family firm.

Going on with the ceremony, The “FBNed” Best paper contribution to practice award has been assigned to “Outside Director and the Disclosure of Firm-Specific Information to the Board of Directors in Privately Held Firms” co-authored by Yan Du, Ann Jorissen and Lorraine Uhlaner. The paper examines the relationship between the presence of outside directors and information disclosed to the board in privately-held firms. The findings show that the presence of outside directors enhances or dampens information disclosure depending on the ownership and governance characteristics of the firm. While family-controlled firms are reluctant to share firm-specific information with outsiders due to greater distrust of outside directors, active board governance and CEO/Chair separation mitigate these negative effects.

Then was the turn of one of IFERA’s most important recognitions, The IFERA Best PhD research proposal award. The award went to Ellen Janssen in co-authorship with Sigrid Vandemaele, Wim Voordeckers and Mark Vancauteren and to their paper “Ownership Succession Financing and Post-Succession Development Paths in Private Family Firms”. The proposal aims to develop a conceptual model that provides detailed theoretical explanations regarding the effect of ownership succession financing on post-succession growth of private family firms. In contrast to management succession, ownership transfers involve the acquisition of a major shareholder stake and, therefore, the financing of this acquisition is a crucial element of ownership succession. The authors propose that financing choices inherent to intra-family ownership transfers may influence successor’s self-interested behavioral tendencies with respect to risk taking and the extraction of firm resources, which, in turn, may damage firm growth.

Lastly, a great recognition for the IFERA Review Team, The “Dutch Centre for Family Business – IFERA” Best reviewer award. Unai Arzubiaga, Jasper Brinkerink, Alexandra Dawson and Vittoria Magrelli have been the proud winners of this prize, aimed to thank their outstanding effort and contribution to the Conference.

It is important to mention the high quality of all nominated papers, the level of competition among nominees and the great commitment of our review network. Once again, the Award ceremony has been enlightened by an enthusiastic and deeply involved audience, showing, as usual, the deep cohesion of the family business community.